Beyond Māori boys’ writing: Reading and writing our WORLD [part 7]

This seven-part blog series is based on a symposium presented at the 2017 New Zealand Association for Research in Education conference by a group of student Warrior Researchers from Kia Aroha College in Ōtara, South Auckland.

As our earlier blog posts have shown, Communities of Learning in Aotearoa NZ are obsessed with our – Māori and Pasifika learners’ – apparent inability to read and write. COLs also seem to have no other definitions of success and achievement – certainly not seeing success in terms of our achievement “as Māori”, which Ka Hikitia, the Māori Education Strategy, defines as the vision for Māori education.

We are going to be very interested to see, with the scrapping of National Standards by the new Labour-led government, what else Communities of Learning are going to use instead of National Standards data in their achievement challenges. NZEI is currently encouraging COLs to take the “opportunity to refresh their goals and strategies and ensure they are authentic to the student needs in your community.” We wonder if COLs really will!

So, is it possible for schools to assess success differently?

The graph below shows my own progress through six years at Kia Aroha College from 2012 to 2017. In this assessment process, developed by our school, we can each see our individual progress in terms of our Māori identity and our relationships alongside our literacy and numeracy outcomes. 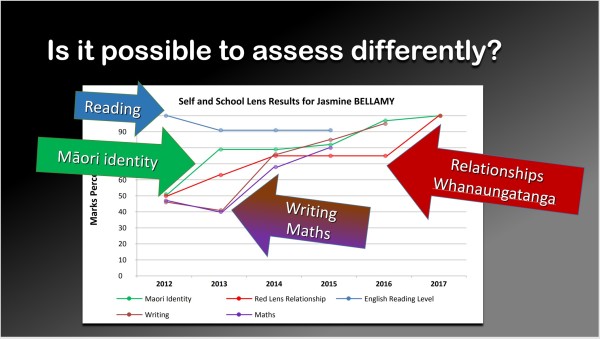 My graph shows a very common pattern for the majority of our students.  In my first year at Kia Aroha College, 2012, the main focus was for me to learn about me. I didn’t stop my other work, but my focus was identity and whanaungatanga (relationships and belonging). I learned about my whakapapa (genealogy) and how important it is to know this before anything else. The next year, 2013, with this foundation in place, my writing and maths shot up by 30-35%.  Every year after, while I have continued to learn about being Māori, and being a leader in our whānau, my other learning results have either improved or have been maintained. I had always loved reading, so that wasn’t a problem for me, but my other learning definitely was, and I knew nothing about being Māori.

This second graph shows my journey right through those six years. It goes on my formal report to my whānau and is something they and I are very proud of. (You can learn more about how Kia Aroha College developed these ways of reporting here and here.) 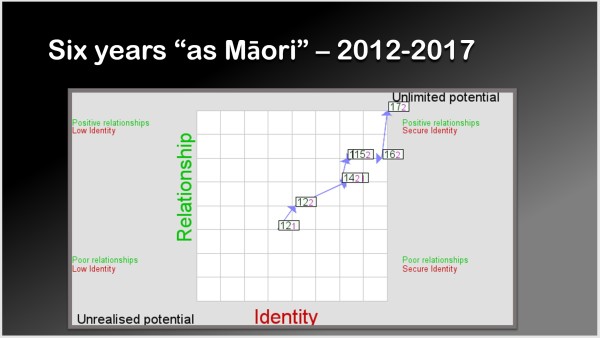 Summing up this series

So, after all our research and analysis, reported in these seven blog posts, how do I feel about Communities of Learning and their intention to improve our achievement and help us reach our full potential?

When I think about raising student achievement, I think about encouraging my peers to stay in school; being a role model; and finishing off my NCEA work so that I can set an example for the juniors at my school. But I also think that our younger students need to know their history – where they come from and the battles that our tūpuna have been through (for example, the Māori land marches, the Wairau massacre, the Dawn Raids, and the Treaty of Waitangi).

In the survey I conducted with fellow students and staff of Kia Aroha College about the Communities of Learning initiative, 71% believed it was of little benefit for Māori in its current form. One survey respondent summed up the feeling of many in this comment:

“Success [within the Communities of Learning initiative] is only according to the dominant discourse and neo-liberalist doctrine. The policy fails to address the cultural, social and political issues that continue to dog this nation.”

I started to think about how the money put into Communities of Learning could be better spent. $359 million was invested into starting this initiative in 2014, plus $155 million every year after, which means that an outrageous $824 million has been spent to fund this initiative.

My survey specifically asked participants how else they felt this money should be spent.

44% wanted the money to go towards children who cannot afford to go to school and Maori-related learning. One of their ideas was providing lower decile schools with the resources they need to get through their day such as food, stationery, uniform. In fact, 82% of my survey participants wanted to see the money spent on, as one respondent commented, “more equitable spending of the nation’s education budget toward the lower decile schools.”

Others chose making Te Reo Māori a compulsory subject with qualified teachers to teach it so that it can be on the same level as any other subject like English and Maths. They also insisted on tīkanga (Māori customs and heritage) instruction in all schools and the teaching of New Zealand history – especially the oppression of 19th century Māori – as compulsory parts of the school curriculum. I think those are all great ideas that might actually help our learning – as Māori, as who we are – more than this intense focus on our reading and writing, which doesn’t seem to be making very much difference.

Our group’s research has shown that, from our perspective, teachers, schools, our education system, our Ministry of Education, and our government are on the wrong track. And as long as this remains the case, initiatives like Communities of Learning that focus intensively on the symptoms, instead of asking what the root causes are, will continue to marginalise us as learners.

Writing policy and developing initiatives “for us”, from comfy chairs in Wellington and from positions of privilege but without talking to us about our realities, our perspectives, our hopes and dreams, cannot result in any sort of community.

As the overarching title of our research, “Beyond Māori boys’ reading and writing” indicates, we need to look beyond the apparent failure of the system to teach us to read, write, or count, in order to really read and understand our world. Our world as Māori and Pasifika youth, marginalised by our education system, determined to reclaim our cultural identity because we know from our own experience that this is what is working for us. We have been unable to find enough evidence in the Communities of Learning initiative to show us that our schools in Aotearoa New Zealand understand this.

We hope that we have challenged you to think further about these policies that have been made by others who know little about us, or our worlds, but that impact every day on our learning – and we hope that you too will begin to question why a few schools succeed, while many other schools fail to sustain our culture and empower us to learn authentically as Māori.

The first three posts in this series introduced the Kia Aroha students’ research and their critical readings of their local community (Ōtara) and school contexts.

The next three posts critiqued the Communities of Learning initiative in terms of policy analysis, principals’ perspectives, values alignment, and students’ perspectives.

This is the final post that concludes the seven-part series. To view all seven posts in the series, click here.

The 2017 Kia Aroha College Warrior-Researchers Group was made up of eight students in Years 12 and 13.

The following six students presented the group’s work at the 2017 NZARE Conference in Hamilton:

Two further students, Aneeva Cherrington-Christie and Harry Seuala, also contributed during the year. The group acknowledge the support of their past principal, Dr Ann Milne, who mentored them through their research.