Ko te kai a te rangatira he kōrero: Discussion is the food of chiefs

Who doesn’t love to sit down and curl up with a good book? For many among us, though, reading does not present as one of life’s simple pleasures but rather as an arduous chore characterised by struggle, then avoidance. This is the case for too many children in New Zealand, where, prior to the government abolishing National Standards in 2017, one in three children was not meeting the National Standard for reading at the end of their first year of primary school. Research indicates that once a delay in literacy development manifests for a child in primary school, a return to healthy levels of progress is unlikely.

The United Nations Educational, Scientific and Cultural Organisation (UNESCO) declares literacy a fundamental human right. They also note that literacy skills are critical to accessing a multitude of other human rights associated with health and wellbeing, community engagement, cultural imperatives, and lifelong learning. In other words, literacy is essential to social and human development in its ability to transform lives.

In New Zealand, literacy rates have received a lot of attention in recent years (see here, here, and here) – so much so, that A Better Start National Science Challenge, funded by the Ministry for Business, Innovation and Employment, is investigating ways to improve literacy outcomes for New Zealand children. Current trends indicate that Māori children are overrepresented in the cohort of learners who struggle with literacy, particularly in their primary school years. These trends have implications not only for Māori children’s experiences and outcomes during formal schooling but, beyond this, for their ability to access fundamental human rights intrinsically linked to self-determination.

My PhD research (2016-2019) strongly rejected the notion of ‘Māori underachievement’. Although this is a term we hear frequently in New Zealand (see here, here, and here), if educational achievement data were analysed with a Māori lens, we would arrive at a very different framework for interpreting, understanding, and addressing the inequitable outcomes some Māori students experience. Therefore, instead of taking a deficit perspective by focusing on ‘Māori underachievement’, my study highlighted the success of Māori tribal groups in adopting literacy in the 19th century as a strengths-based historical precedent from which to propel contemporary success. I also argued that the education system today is lacking in its provision of responsive literacy interventions for Māori children, and that the ways in which this system currently measures students’ progress and achievement are, in many ways, culturally inappropriate.

The issues above raise questions about culturally responsive pedagogy and culturally relevant content, both of which are pivotal factors in contributing to the inequitable literacy achievement rates of Māori and non-Māori children. With this in mind, and in considering the notion that literacy is a fundamental human right critical to accessing other human rights, it was vital to explore literacy in a Māori context – in this instance, specifically with bilingual children – in an attempt to identify effective strategies which contribute to enhancing early literacy development for Māori children.

My PhD research involved eight Māori preschool children who attended a dual language (English and te reo Māori) early childhood centre and who were exposed to both English and te reo Māori in their homes. Drawing from He Awa Whiria (Braided Rivers) model, two strands of knowledge and research (Western and Te Ao Māori) were woven together to culminate in a culturally responsive literacy intervention for Māori learners. The term ‘intervention’ is used here not in the sense of relating to a deficit or need, but rather in terms of a focused effort to bring about specific positive transformations in the experiences and positioning of Māori. 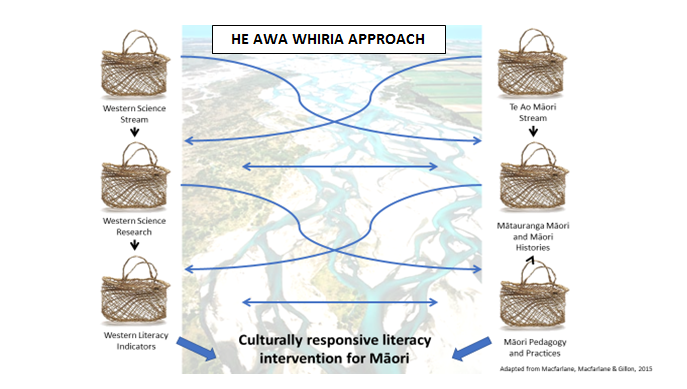 The research intervention involved the children, together with their whānau, participating in activities associated with traditional Māori pedagogy, such as:

I was seeking to determine if these practices strengthened children’s foundational literacy skills:

The children and their whānau participated in these activities each week in both English and te reo Māori. In addition to this, they received two books per week – one in English and one in te reo Māori. Whānau read these books with their children in an interactive manner designed to stimulate the above cognitive skills, which are known to be critical to literacy success.

I collected both qualitative and quantitative data about both the children’s literacy skills and their whānau / home literacy practices and environment pre-, mid-, and post-intervention as well as six months after the intervention ended.

The findings of this study showed that the intervention had a substantial and sustained effect on both the cognitive skills and the home literacy environments of the children participating in the study. The intervention particularly strengthened the children’s phonological awareness skills and their vocabulary knowledge. It also reaffirmed for whānau the importance of reading and incorporating other literacy practices in their homes. In other words, delving into Te Ao Māori, elevating Māori pedagogy and epistemology, and re-establishing historical practices that had contributed to tribal groups’ past success with literacy and learning transformed the cognitive skills associated with children’s emerging literacy, as well as the home literacy environment and practices. Both these cognitive skills and the home literacy environment are known to heavily influence children’s literacy outcomes.

Ultimately, the study offered a strong counter to the deficit discourse relating to Māori learners, and proposed a response in which whānau are included as part of the solution rather than perceived to be contributors to the problem. Further to this, by creating a strong foundation on which the children’s literacy will develop, and by providing whānau with tools and strategies to continue to strengthen this platform, the children who participated in this study enhanced their ability to access a multitude of human rights, which are critical to growing healthy, engaged, and prosperous individuals and communities.

At a more practical level, a key finding in this study was the ease with which whānau were able to implement small changes in their daily lives, which made a significant and sustained difference to the emerging literacy skills of the children. By blending traditional Māori pedagogy with elements known to strengthen children’s foundational literacy skills, whānau and teachers can incorporate activities in their home and school environments that support Māori children’s literacy. For example:

Small steps such as these can make a world of difference to children’s foundational literacy skills, which can impact on their experiences and outcomes during formal education and beyond. These approaches also allow children to connect to their heritage, and draw on the strengths and wisdom of Te Ao Māori, thus supporting the Ka Hikitia aspiration of Māori children enjoying educational success as Māori.

Cover image: Melissa and her son, Awa, enjoying books together. Used by permission.

Melissa Derby (Ngāti Ranginui) recently completed her PhD at the University of Canterbury, which formed part of A Better Start National Science Challenge. Currently, Melissa is on a Fulbright-Ngā Pae o te Māramatanga fellowship in the USA. Melissa is a member of the New Zealand Psychological Society, and the New Zealand Association for Research in Education. She has a Bachelor of Arts degree from Victoria University of Wellington. She graduated with a Master of Arts with first class honours from Auckland University of Technology, and her thesis made the Dean’s List for Exceptional Theses. She also holds a Graduate Certificate in Indigenous Studies from Columbia University in New York. Her scholarship has been recognised through a range of awards, including a Whāia Ngā Pae o te Māramatanga Doctoral Excellence Scholarship from the Māori Centre of Research Excellence, a SAGE Young Writer’s Award, and the Brownlie Scholarship, which is awarded to the highest ranked doctoral scholar at the University of Canterbury.